Ten reasons why "Keep It Cool" is smart for retailers

Turn on the local news on any summer day, and there's a decent chance you might hear a familiar story: a regional power company is struggling to meet electricity demand. The power grid strains as we draw megawatts of energy into our homes and businesses to keep them cool during a sweltering hot summer day. Around the country, massive coal-fired power plants are running at full capacity, spewing tons of pollution into the air.

Summer is here. It is hot, hazy, and humid. Walking past a retail store, you can feel the cool air from an open door, an invisible welcome mat of air-conditioning inviting you to come inside and shop. Something is wrong with this picture.

It is time for retailers to close their doors. Among businesses, retailers have one of the biggest opportunities to save vast quantities of energy and reduce pollution. New York City realized this, and, over a year ago, outlawed such behavior. But the sight is still too-common around the country. Faced with the rising concerns around energy costs, energy security, and air pollution, we can no longer afford to spill air conditioning outside, through doors wide open for business.

Here are ten reasons why retailers should keep their front doors closed during the hot summer months:

1. There's no available data showing that an open door increases sales or traffic.

While this has been a long-held belief among some retailers, it's largely based on anecdotal evidence and an outdated assumption of what consumers find acceptable in today's social environment. Our recent survey data (see #6 below) suggests that a majority of consumers view this habit as "wasteful".

How much electricity? ConEdison (a New York utility) estimates that one store (10,000 sq ft) that leaves 1 door open for 8 hours a day (5 days/wk), wastes 4,200 kWh of electricity from June –September. 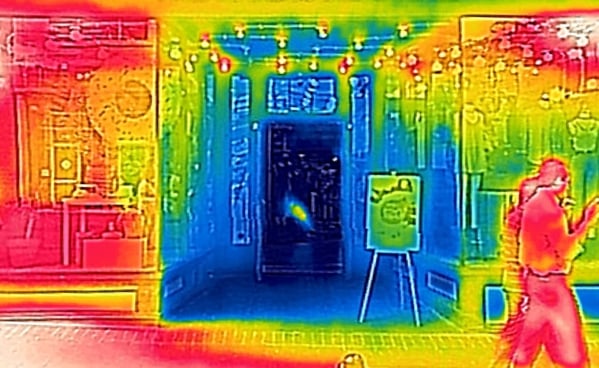 A store with its front door left open in the summer, as seen by a thermal camera.

3. It drives up your operating costs.

ConEdison estimates that each store pays about $250 more per month for electricity when doors are open with the air conditioning running.

4. That electricity that's being wasted? It was generated in a process that releases pollution.

How much pollution? The same ConEdison calculations estimates that, on average, such a store accounts for around 2.2 tons of carbon dioxide (over a 4 month period). That's the same amount of CO2 produced by a semi-truck driving from New York to Miami (using around 200 gallons of diesel gasoline).

O the hottest days, this waste needlessly contributes to already-peak levels of electricity demand, further destabilizing power grids. Wasting energy (by leaving a door open) is most harmful on the hottest summer days.

Popular Mechanics explains: "Much of the electricity consumption in the U.S. is concentrated to a handful of hours during the year, primarily during hot summer days. This so-called peak demand puts considerable stress on the grid, increasing the risk of blackouts and brownouts. It also significantly raises the year-round price of power for consumers."

6. Consumers care about doors being closed.

According to a national survey of 1,500 millennial consumers, 62 percent think that this practice is wasteful, and up to 25 perent are less likely to shop at retailers that leave their doors open with the air conditioning on.

7. It's a chance for retailers to communicate their brand's commitment to energy conservation.

Whether consciously or not, consumers gravitate towards brands that align with their personal values. As more and more consumers become concerned about matters regarding energy and climate change, energy-awareness is a value that brands can't afford to ignore. Stores can communicate their energy-aware values by closing their doors and using a window sticker like this one to start a dialogue with customers. 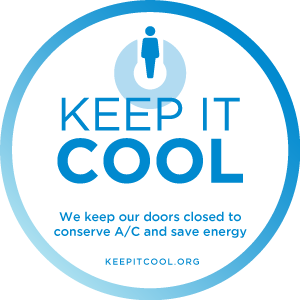 Get your own sticker for free here.

8. Closing the door is a business policy that costs nothing to implement.

Closing a store door costs nothing. In fact, in all the reasons we've said above, the savings from keep doors closed while running the A/C can save thousands.

9. It perpetuates an energy-ignorance the planet can't afford.

Significant action needs to be taken across all industries and sectors in order to improve our climate for a sustainable and healthy future.

Check out Keep It Cool—a campaign to stop this waste and partner with energy-aware retailers.